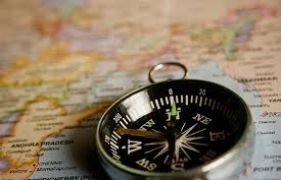 A team of engineers from French and German companies has come together to improve the safety of ships at sea with a solid-state, electrostatic compass that can find true North without ever needing maintenance or replacement.

All ships over a certain weight must be fitted with a compass that can find true North, according to the International Convention for the Safety of Life at Sea (SOLAS). The problem is that the current standard for this purpose is the mechanical gyroscopic compass, which requires regular maintenance, periodical replacement, and often contains chemical pollutants. As around 10,000 ships were using these compasses in 2008, there was a major opportunity to improve safety, lower costs and benefit the environment.

Traditional mechanical gyroscopes use the direction of the Earth’s rotation to find true North, but they are subject to wear and tear that limits their lifespan to between two and five years. What is more, they must be kept immersed in a liquid that lubricates their movement and must be exchanged every one or two years using a time-consuming and delicate procedure. Finally, some units still use mercury for this purpose, contributing to heavy metal pollution. Alternative maintenance-free gyroscope technologies have been around for many years, but – unfortunately – high manufacturing costs and purchase prices have prevented their widespread uptake.

But there is a solution. In 2008, four companies – three French and one German – came together to develop a new kind of marine gyrocompass as part of the Vibrating European Compass or VECTOR project. Supported by EUREKA through the EURIPIDES Cluster, this endeavour brought together SMEs and large enterprises for the purpose of exploiting promising research that had already been conducted in France. The project ran between May 2008 and July 2012, with funding of €8.18m, and the ambitious intention of creating a product that would never have to undergo maintenance of any sort.

Lionel Rosellini is Program Manager at SAFRAN, one of the large enterprises involved in the project – although it operated under the name Sagem at that time. “It was a productive partnership,” he explains, “SMEs are proactive and the larger companies had a technical background; both contributions brought us towards the ideal product.” Each company made an individual contribution to the project, with SAFRAN handling core responsibilities such as the gyroscope design study, design and development of the inertial measurement unit, and evaluation of laboratory systems. German partner Raytheon Anschütz acted as the system manufacturer, while the two SMEs – SYSNAV and Symétrie – collaborated on accelerometer and inclinometer design.

Sagem’s HRG (hemispherical resonator gyroscope) has no moving parts at all, relying instead on electrostatic forces that create flexural resonance in the bell-like hemisphere which gives the gyroscope its name. As well as developing the gyrocompass, the partners also had to optimise it for use in every situation – in the dock, on the sea and during ship maintenance – and evaluate its performance in simulations and at sea.

Following completion and pilot testing, the HRG marine gyrocompass was released on the market with the names BlueNaute (Sagem) and Horizon MF (Raytheon) – and met with a warm reception from professionals in the shipping industry. It is easy to machine and assemble, leading to low manufacturing costs and market prices, and the convenience of its maintenance-free operation is combined with other benefits such as improved data link capabilities.

So effective is this product, in fact, that although VECTOR was completed in 2012, there is still no competitor on the market, and the technology has spread beyond naval navigation to be applied in a diversity of other fields.

Since the SOLAS Convention applies to 82 per cent of the countries in the world, and regulates more than 99 per cent of ships, this was a project with a truly global impact, and one that has affected markets worldwide. It has also ensured that the European hold on this market has increased in comparison with Asian and US competitors – who previously had the upper hand in this field of technology.

Even better news is that many of the partnerships formed during work on the project are still operational and productive. “SAFRAN has certainly maintained these relationships, and we are still working with SYSNAV and Raytheon in particular; EUREKA was the facilitating agent that brought us together,” Rosellini says.

For Jean-Luc Maté, Chairman of EURIPIDES² "VECTOR illustrates the excellence of the French-German cooperation promoted by FIEEC (French Federation of Electrical, Electronic and Communication Industries) and the ZVEI (German Federation of Electrical and Electronic Industries) and demonstrates how EURIPIDES² cluster facilitates the cooperation of small and large businesses around a high-tech product, very innovative, made in Europe and addressing the word market. "