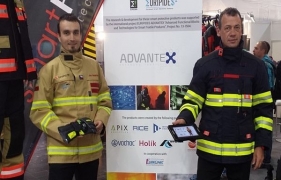 The SmartPro® fire-fighting suit, is set to become a danger disrupter when released this year.

Hazardous conditions are part of jobs like fire-fighting and iron smelting. Smart electronic systems help to reduce that risk. Clever safety wear with built-in sensors keeps tabs on the working environment and the worker. The SmartPro® fire-fighting suit, is set to become a danger disrupter when released this year.

The tiny sensors and microsystems embedded in protective work wear can detect dangerous gases in the environment and measure temperature and humidity inside and outside the protective clothing. This means data on working conditions (and the worker’s physiological response) can be monitored and processed in real time.

Several market-ready smart-clothing technologies have been developed and tested by partners in the ADVANTEX project, funded by the EURIPIDES2 cluster programme. The 48-month project, which recently ended, focused on smart protective wear (jackets, gloves and boots) and integrated systems to safeguard workers in hazardous conditions, starting with fire-fighters.

“A key feature of the fire-fighting suit we developed is the accurate sensing of temperature in different layers of the suit, monitoring of toxic and combustible gases, and active illumination system and localisation system for tracking fire-fighters’ movements,” says Radek Soukup of West Bohemia University, ADVANTEX dissemination partner with expertise in smart textiles.

Initial reactions to the new SmartPro® suit from fire-fighters has been extremely positive, according to Regis Barattin of APIX Analytical, which led ADVANTEX.  “When they enter dangerous situations, fire-fighters can expect much greater overall situation awareness than ever before,” he believes.

Gearing up for commercial success

Holik International, a Czech industrial partner, has already commercialised one of the technologies coming out of the project. Its SensPro® protective gloves for fire-fighters include integrated technology so wearers can monitor the surface temperature of the gloves, and even measure the heat of nearby objects using an infrared sensor. The readings are shown on a highly ‘visual’ LED bar located on the glove, and at the same time transmitted via Bluetooth either to mobile devices with an installed SensPro® application or to a suit control unit (SCU), which in turn sends the data to the commander control unit (CCU). These readings can alert fire-fighters to impending heat build-up and danger. The SensPro® glove won the Reddot 2018 Award for best product design.

The project’s many results have been well disseminated in leading journals and conferences, such as the European Conference of Protective Clothing (ECPC 2018). The smart fire-fighting jacket was awarded the Gold Prize at the AMPER 2017 electronics fair, and several of its components are patented or patent-pending, including the protective glove, suit-monitoring features, and rubber-based electrodes integrated into a shoe sole. According to Barattin, the technical partners – CEA-Leti, Vochoc, Applycon, Movea-InvenSense, Holik and APIX – have reported industrial and/or commercial breakthroughs thanks to participating in ADVANTEX. West Bohemia University has also made innovative contributions to the overall outputs.

But these accolades are mere icing on the cake. The true test of the smart suit’s success, and the collective achievements of the consortium, will be how it fares on the fast-growing market for protective clothing: “Based on feedback during trials and market trends, we are confident the launch of the suit next autumn will be a success,” says Petr Loukota, executive director of Vochoc.

The market for fire-fighting garments, boots and gloves without smart electronics is currently around USD 550 million (~EUR 478.45 million). The market potential (2018-2026) for smart versions like ADVANTEX’s is estimated at USD 59.9 million (~EUR 52.11 million). According to IDTexEx reports, the wider market (medical, safety, fitness and wellness) for wearable technology is expected to reach USD 70 billion (~EUD 60.89 million) by 2024.

ADVANTEX’s technical solutions can make working in other sectors (energy, petrochemical, construction and waste recycling), as well as in the military much safer, too. That expands the potential applications, and the market potential, significantly, according to the team.

Although the original idea for the project came from the Czech partners, it quickly became clear that expertise was needed in pinpointing fire-fighter locations (accurate ‘inertial localisation’ even indoors when satellite signals can drop out), low-profile MEMS-based sensors, and lightweight, robust power solutions.

This unique cross-border match-up was ideally suited to the EUREKA programme, confirms Soukup: “Many of the partners had a positive experience working together in a EURIPIDES project, called INTEX, which is why we returned to the programme to fund ADVANTEX.”

The support made the successful international collaboration possible, pairing the Czech partners experience in innovative textile product development with the French partners’ deep knowledge of pioneering electronics, sensors and inertial localisation systems. “But the real success came down to very good chemistry and leadership style by APIX, ensuring we all worked in a friendly and creative atmosphere throughout the project,” concludes Soukup.