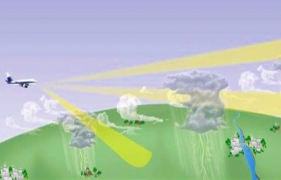 French electronics group Thales headed a European consortium that worked out how to upgrade airplane satellite communications by developing a more sophisticated set of antennas.

Providing satellite communications on today’s planes is a demanding business. Pilots need to communicate with air traffic control on runways and flight paths that are getting ever busier. Airlines also want to offer their passengers more onboard entertainment and even internet during flights. A European consortium headed by the French group Thales has taken an important step towards upgrading the satellite communications on tomorrow’s planes through the four-year Euripides project IDEATA.

“Equipment designers know that current technologies are limited,” explained project coordinator Philippe Kertesz, head of research and development for packaging and interconnection at Thales’ Systèmes Aeroportés, which manufactures aerospace products. The nine partners from France, Hungary and Spain worked together to develop a more sophisticated set of antennas. They wanted them to be thinner - allowing them to be more easily fitted into planes while still offering the bandwidth necessary to provide more services.

’Having a large European consortium like this helped us all to share the risk’ – Philippe Kertesz, head of research and development for packaging and interconnection at Thales’ Systèmes Aéroportés

The first company to commercialise a better system will have a clear competitive advantage. However, it is not an easy market. American airspace giant Boeing, for instance, terminated its Ku Satcom broadband connexion venture in 2006 due to disappointing market uptake, which shows the challenges of finding the right systems. “That was the great part about this consortium – we have shared the risks,” explained Kertesz. “Building radar systems is very complex and we wanted our new system to be smaller and more compact.”

The consortium had a broad skills range. While Thales oversaw the project and defined the needs of their target customers - plane manufacturers - Spanish electronics component manufacturer TTI developed the interconnections for the antennas that would be fitted into an electronic, rather than mechanical, steering wheel. French company Smiths tested out new pressure connectors, ARELIS worked on the packaging technology, Elvia-Lithos, of France, brought its expertise in the circuit board market. XLIM, of France, and Hungary’s BME used computer models to build components for the best antennas. IT companies TKI-Ferrit, of Hungary, and Spain’s CONATEL trialled new concepts in IDEATA.

With so many partners from different types of organisations, coordination was key. Kertesz and XLIM set up a website where documents about the project were uploaded and organised a meeting in a different country every three months to ensure smooth communication among the project participants.

The project has proved the new radar system is feasible and could be commercialised by 2020. As well as on board planes, it could also have other applications in the naval and auto sectors. “Because it’s lighter, planes would use less kerosene,” said Kertesz.

IDEATA has been funded by the French Ministry of Industry (DGE), CDTI (Spain) and the Hugarian National Innovation Office.